News The Brief History Behind Your Cutlery
Request a Quote 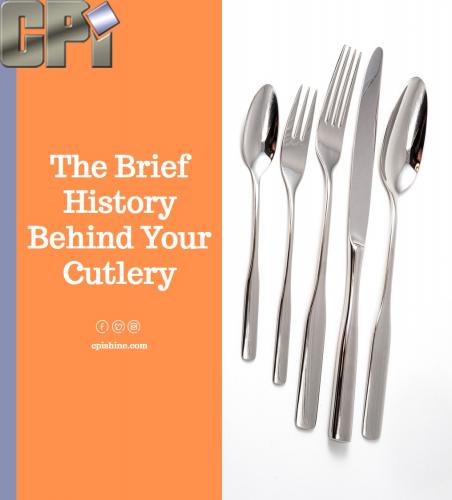 More Articles
The Brief History Behind Your Cutlery
Prev
Next

The Brief History Behind Your Cutlery

Ever pervasive, universal, and used in our everyday lives - tableware, a modest staple surrounding our food consumption, is rarely given a second thought. Though the sign of good cutlery may be to go unnoticed, it is in this accomplishment that we should pay tribute and be pensive towards the history behind its progression as a modern day convenience (though some may say necessity), and how the cutting edge of cutlery in bygone days has become today’s commodities.

From flint knives to polished stainless steel flatware, let’s peruse a high-level view of the development of not only cutlery, but humanity’s technological advancements alongside it.

It Begins with Flint...

In a time long before polished stainless steel flatware, almost 800,000 years ago, is a sedimentary rock known as flintstone - a name you may associate with the cartoon, which was so aptly named due to the era of the Stone Age being abundant with this naturally occurring rock.

Known for their extremely sharp edges, archeologists have concluded they were fashioned into extremely useful tools, now known as knives, for cutting, skinning, and hacking hunted prey as an intuitive method of extracting resources from animal carcasses to the fullest extent.

Succeeding the tumultuous efforts involved with flint craftsmanship, and with accounts dating back more than 3,000 years ago, the discovery of metalworking with ferrous metal in humanity was applied to eating utensils.

Thanks to cast iron allowing for the production of iron in mass quantity, this allowed for knives constructed from iron to take precedent as a household item across most of Europe when dining.

While progress had been made in producing eating utensils on a larger scale with iron, another problem reared its head – corrosion. Due to the broad nature of environments cutlery is presented with on a daily basis, mixed with the tendency of oxidation for iron, cutlery didn’t last long when used and became a hassle for performing an activity that should be enjoyed. Thankfully, there came a solution…

Having made its name in history less than 200 years ago, stainless steel, invented by Henry Brearley, is the fundamental cornerstone to the cutlery revolution, acting as the hub to the modern day conveniences we now enjoy.

With its intrinsic properties of resisting corrosion in harsh chemical environments, Brearley went on to help coin the term “stainless steel” and start producing this flatware at a local cutler.

Since then, modern, and ongoing technological advancements have allowed us to implement computerized processes to manufacture cutlery that contains specific ratios of alloys; allowing for the austenitic, and polished stainless steel flatware in use today that is capable of retaining its edge.

The Silvershine™ product we house here at CPI is perfect for those of you, especially in the hospitality industry, looking to save significant amounts of time, and costs associated with the upkeep of your cutlery. By directly integrating Silvershine™ into your daily operations, you’ll have polished stainless steel flatware available to you with consistent results, every time.

We’re always here to talk through your needs when it comes to maximizing the efficiency in your business through our polishing products, call us for a discussion!