News The Origins of Contemporary Cutlery
Request a Quote 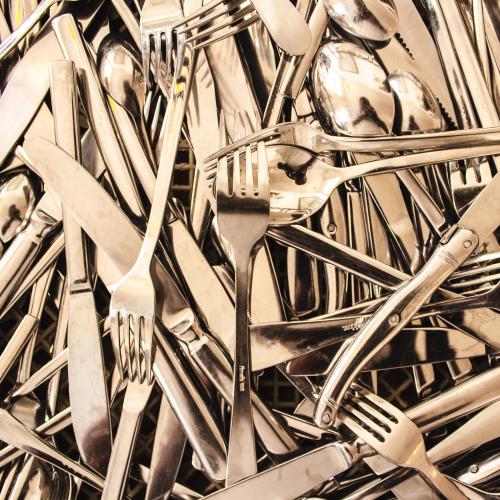 More Articles
The Origins of Contemporary Cutlery
Prev
Next

It’s difficult to imagine what eating meals would be like without the contemporary use of polish stainless steel cutlery. Whether it’s to experience high dining or more casual eating purposes, there’s no denying the fact that we rely on cutlery to fully enjoy our meals. But like everything around us, polish stainless steel cutlery has evolved along with the history of Western dining culture.

Today we’ll examine the origins of different types of cutlery we use and rely on today.

The Origin of Knives

The first type of utensil used was the knife back in the Paleolithic and Neolithic periods. Knives were made using sharpened flints or other stones that were attached to wooden handles. It wasn’t until the Bronze Age (3000-7000 BC) that metalworkers were able to forge metal knives from copper and bronze. Knives from this time were primarily used for warfare, with smaller, more precise versions used for eating. Knives became more commonplace among all classes of the Medieval era as iron and steel entered the realm of the West.

The Origin of Spoons

Like knives, spoons appeared for the first time during the Paleolithic period as sea shells connected to sticks for the purpose of consuming warm liquids. As time progressed, the bowl shaped end of the spoon we are familiar with, was also made from wood. It’s interesting to note that different ancient civilizations used their own spoon design – the Greeks used seashell spoons, the Romans used wooden spoons, and Egyptian Pharaohs used intricate gold and silver spoons that featured engravings of hieroglyphs and other artistic designs.

The Origin of Forks

Unlike the long history of knives and spoons, forks only became commonplace a millennium or so ago. The very first recorded event in which the fork was used was in Venice in the year 1004, where a Greek niece of the Byzantine emperor used a golden fork at her wedding. Unfortunately, it wasn’t until much later that the fork would become more commonplace. In 1533 Catherine de Medici of the French Court was first introduced to the fork – the fork started to gain traction among other European courts.

Today, we rely on contemporary versions of cutlery every day. Knives, spoons, and forks are commonly made with stainless steel – a more hygienic, durable, and easy-to-clean metal than previous cutlery materials in the past. While more intricate versions of these utensils may be used for fine dining purposes, we still rely on the standard three when dining out or enjoying a meal from the comfort of our home.

So glad we now have the technology to polish stainless steel cutlery!
Posted by: Jerry | November 8, 2019, 3:40 pm
Post a Comment
*** Your email address will not be published.